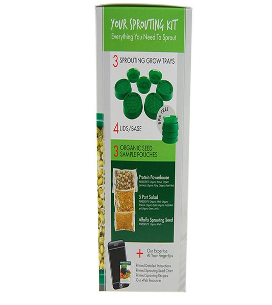 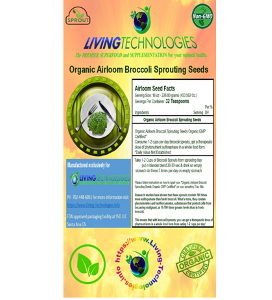 The Broccoli Connection: Broccoli Sprouts Fight Cancer and Other Diseases 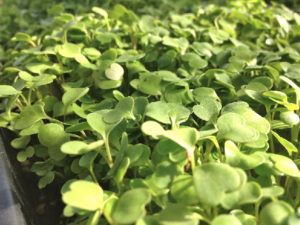 Maybe you’ve already heard about this amazing gift from Mother Nature – if not, Living Technologies is proud to announce another way to beat the illnesses currently plaguing our society. Namely, broccoli sprouts fight cancer and many other diseases, and you can get the full benefit of them on their own in broccoli sprouts kits – and, in conjunction with our Super Immune Activator kit as a way to powerfully enhance what the SIA kit is designed to do in your body.

There is ample evidence to suggest that broccoli and broccoli sprouts fight cancer…and have many other health benefits as well. In fact, there are over 300 published scientific papers listed on PubMed in relation to this amazing vegetable and what it can do to enhance our health.  The proposed active component in broccoli is Sulforaphane, an organic Sulphur compound found in broccoli and in other cruciferous vegetables such as cabbage, cauliflower, horseradish, etc. – the richest source being in broccoli sprouts.

Sprouts are far less expensive if made at home rather than purchased, so we strongly recommend growing your own sprouts. It’s easy and will greatly add to your overall nutrition. Think about this: sprouts can contain up to 30 times the nutrients of organic vegetables! They also allow your body to extract more of the vitamins, minerals, amino acids, and essential fats from the rest of your diet. They look and taste like alfalfa sprouts. Again, when you consider the nutrient-density of sprouts, calculations suggest 10 pounds of broccoli sprouts translate into as many cancer-protecting phytochemicals as 1,000 pounds (half a ton) of mature broccoli!

Sprouts are an authentic super food that many overlook or have long stopped using. In addition to their superior nutritional profile, sprouts are surprisingly easy to grow if you’re an apartment dweller, as they don’t require an outdoor garden. During sprouting, minerals, such as calcium and magnesium, bind to protein, making them more bioavailable. Furthermore, both the quality of the protein and the fiber content of beans, nuts, seeds, and grains improves when sprouted. The content of vitamins and essential fatty acids also increase dramatically during the sprouting process. 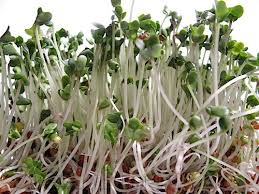 You probably already know that cruciferous vegetables such as cauliflower, cabbage, kale, broccoli and brussels sprouts are excellent foods compact with nutrients to prevent cancer. However, did you also know that their sprouted forms which are less than a few days old can actually pack a stronger punch in the fight against cancer?

Sprouts from the seeds of vegetables begin to germinate within days of being soaked in water. Numerous studies have found that the highest cancer protective properties are most concentrated in these sprouts at a time of 3 days following sprouting

Making sprouts a daily part of your diet has not only been detected to reduce the incidence of numerous types of cancers, but the nutrients in sprouts may actually reverse the damage already created by the development of cancer in your body.

One of the most powerful cancer preventative nutrients found in cruciferous vegetable sprouts such as broccoli sprouts is glucoraphanin. Glucoraphanin is broken down during digestion and converted into a powerful antioxidant sulforaphane (SF).

The antioxidant potentials of sulforaphane have the ability to influence and protect every organ in the body as long as its originating form, glucoraphanin, is consumed daily.  Broccoli sprouts are the best source of this nutrient, but it can also be found in kale and kale sprouts, cauliflower and brussels sprouts.

Some of the latest research into this “super food” suggests that broccoli sprouts may help detox toxic pollutants. As reported by Time Magazine:

“Broccoli sprouts specifically are a source of glucoraphanin, which creates sulforaphane when chewed or swallowed. That compound accelerates the body’s ability to detoxify from various pollutants…”

The three-month long study included about 300 Chinese men and women living in one of the most polluted areas of China, a rural community in the Jiangsu Province.

The test group drank half a cup a day of a beverage consisting of sterilized water, pineapple, and lime juice, with dissolved freeze-dried broccoli sprout powder. The control group drank the same mixture without the addition of the sprouts.

After urine and blood tests were collected and analyzed, the researchers found that the test group, who received the broccoli sprout powder, excreted far greater levels of two carcinogens. Excretion of benzene increased 61 percent, and the rate of excretion of acrolein increased by 23 percent.

Benzene is usually found in car exhaust fumes, but can also be ingested via soda, where it can form from benzoate salt—used as a preservative. Acrolein forms from the breakdown of certain indoor air pollutants, from the burning of organic matter such as tobacco, and the burning of fuels like gasoline. Study author Tom Kensler told Time Magazine:

“The situation is that people throughout China are breathing dirty air, and the exposure is largely unavoidable. We wanted to boost the defense mechanism that accelerates the rate that these are cleared form the body so there is less opportunity for harm to be evoked by chemicals.”

When asked if people living in other large cities like New York or Los Angeles could benefit from drinking the same mixture, Kensler says he thinks their approach could be extended across all people.”

Want to know how to eat broccoli sprouts? The best way and best time is 3 days after sprouting, and just chewing them and enjoying them organically. But, the best way, we feel, is in conjunction with our super-probiotic formula for maximum health…

Get the Full Benefit of Our Super Immune Activator Kit

To get the best benefit from our Super Immune Activator kit we suggest you include broccoli or broccoli sprouts either as a supplement or in your diet. Many people have compromised vitamin D receptors, and broccoli sprouts will help repair this deficiency.

A specific gene called the VDR (vitamin D receptor) holds the gene codes for this receptor.

Unfortunately, sick and unhealthy cells express less of the VDR gene, meaning that they are unable to accept and utilize vitamin D.  Supplementing with more vitamin D won’t help these sick cells. Without a receptor site, vitamin D has nowhere to go.

The good news is that research shows that Sulforphane (broccoli spouts are the highest source for this) increases the expression of the VDR gene.

And of course, it has many other health benefits. 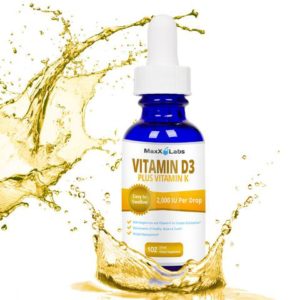 Vitamin D, otherwise known as the ‘sunshine vitamin’, is well documented for its role in bone health, immunity and calcium transport.   Vitamin D can only be obtained from two sources – dietary and sunlight.  Good sources of dietary vitamin D are oily fish, good quality milk products, meat, eggs and fortified foods or supplements. Vegans and vegetarians may find dietary vitamin D within products such as fortified soya milk.

Vitamin D binding protein is not obtained from dietary Vitamin D sources in the current western diet.  It could have been obtained from meat, fish and dairy sources before cooking, pasteurizing and processing became the normal way of dealing with these food groups.  The protein is sensitive to heat and is denatured during processing.

In a healthy person, this protein is made in adequate quantities in the liver, but some people may benefit from supplementation in order to obtain maximum benefit from vitamin D.

Vitamin D Binding Protein binds to vitamin D and is the carrier protein for vitamin D.  All cells in the body have receptors for vitamin D.  For example, in the immune system, when a T cell encounters a foreign pathogen, it extends a signaling device or ‘antenna’ known as vitamin D receptor, with which it searches for vitamin D.  This means that the T cell must have vitamin D or activation of the cell will cease.  If they cannot find vitamin D, they won’t begin to mobilize.

Vitamin D plays a critical role, contributing to normal cell division, the normal function of the immune system and healthy inflammatory responses.  Deficiency of Vitamin D is common amongst people with inflammatory and auto immune disorders.

Who benefits from vitamin D supplements?  Research suggests that up to 85% of people could be deficient in Vitamin D without knowing it…leaving them in a state of compromised health.  In fact, some scientists call for urgent action because current scientific research suggests that all cells and tissues in your body have vitamin D receptors – and further concludes that every cell and tissue needs vitamin D for its well-being.  Our GcMAF-building SIA kit supports a vitamin D protocol and is designed to support a diet or lifestyle that contains adequate vitamin D levels.

Even high intake of vitamin D may be ineffective if the body is not able to transport it to where it is needed, if there is a deficiency of vitamin D binding protein.

Especially with the broccoli sprouts added to the mix and allowing for more absorption of the Vitamin D3 and K2, thereby open the pathways even wider for your body to begin assimilating the nutrients it needs to stave off “terminal” or chronic illnesses. This is why growing your own broccoli sprouts is a winning idea for those devoted to good health.

It’s a multi-punch knockout to the immune compromisers, free radicals, and toxins we are subjected to environmentally and which cause cancer, autism, diabetes, and a host of other maladies.

So, please reach out to us with any questions about this or just order our broccoli sprout kits and enjoy the better measure of health! Living Technologies wants to share with you the many ways broccoli sprouts fight cancer and many other diseases, and how you can get the full benefit of them in our health-restoring broccoli sprouts kits – with or without our ultra-probiotic Super Immune Activator kit – as a way to powerfully enhance your overall health alone or let the SIA kit deliver you even more optimum health!