GcMAF Cancer Cure Will Save Your Life and a Fortune

We’ve been tiptoeing a bit around a very sensitive subject, but we believe it’s time to say what needs to be said. The GcMAF cancer cure has gotten dozens of naturopathic doctors killed by the Big Pharma hitmen because it WORKS. There’s no other reason that they would expend so much time, money, and energy hiding this cure for cancer from the public and burying the evidence. It’s what indigenous peoples, dairy farmers, and many others have known for millennia: for optimum health, you need probiotics, and particularly bovine colostrum and raw milk kefir.

Hiding the GcMAF Cancer Cure By Any Means Necessary

Over the past year, there have been media reports of alternative health doctors associated with a compound called GcMAF that have been found dead under mysterious circumstances. The cause of death in all of these cases has been somewhat suspicious and linked to sudden heart failure, suicide, etc. What’s a major cause for concern is that none of these doctors were showing any signs of mental or physical illnesses that would in any way lead those around them to anticipate a problem.

It then begs the question, what exactly is GcMAF, and why may it be a clue into the sudden deaths of these notable doctors? We’ll examine that and how to increase GcMAF naturally in the most cost-effective way possible.

GcMAF Naturally Occurs in Our Bodies

Globulin component Macrophage Activating Factor or GcMAF, is also called vitamin D-binding protein-derived macrophage activating factor. It is an endogenous (occurring within the body) glycosylated vitamin D binding regulatory protein present within the immune system. This naturally occurring protein is found in all healthy individuals, but is depleted in people with an improperly functioning immune system.

Excitingly, GcMAF immunotherapy has been shown to improve immune system function – and quite possibly, prevent and even reverse cancer. 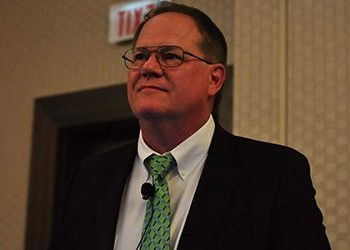 his clinic was raided by the FDA

Let’s consider the intriguing case of Dr. Jeff Bradstreet. Dr. Bradstreet received his science undergraduate and medical degrees from the University of South Florida and held a Florida medical license for over 30 years. In media reports, however, he is referred to as a “controversial” alternative medical practitioner.

In June 2015, Dr. Bradstreet’s clinic in Georgia was raided by the FDA. The search warrant allowed for the seizure of all GcMAF on the premises and related items and records. After the raid, Dr. Bradstreet fled town to a hotel near Lake Lure in North Carolina. If indicted, he would have faced up to 20 years in prison for practicing what the FDA would deem “unethical science.”

Dr. Bradstreet went to check into his hotel but the room was not ready. Hours later his body was found with a gunshot wound to the chest about three miles away in Chimney Rock, NC. A handgun was found nearby.

Police reported the death to be a suicide, but Dr. Bradstreet’s family and supporters are conducting their own private investigations, believing there is much more to the story than the official version from the authorities [has the “official version” of any story been anything more than lies and obfuscation of the facts?]. They say he had shown no signs of depression or suicidal behavior, and many of them believe he was murdered for his knowledge of GcMAF therapy.

So let’s learn more about GcMAF, and why Dr. Bradstreet was such a strong advocate of this powerful therapy for children with autism, cancer patients, and many others suffering with chronic illnesses.

GcMAF Activation of Macrophages is Key for a Healthy Immune Response 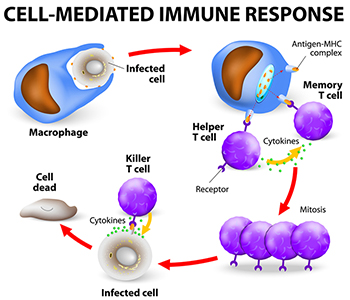 Macrophages are white blood cells that protect the

GcMAF plays an important role in activating macrophages. Macrophages (from the Greek for “big eaters”) are white blood cells that literally swallow and digest cellular debris, foreign substances, bacteria, cancer cells, and anything else that does not have the “right” proteins to identify it as a healthy cell belonging to the body.

When GcMAF is depleted, the immune response becomes weak because macrophages are not being activated by GcMAF. Furthermore, our body’s tissues are not successfully repaired and homeostatic imbalance can occur from a lack of available macrophages.

Microglia are a very important type of macrophage located specifically in the spine and brain. They defend your immune system against threats to the central nervous system which cause trauma and represent a crucial first line of defense.

The Role of Vitamin D in GcMAF

There are many benefits of Vitamin D, but especially in GcMAF. Vitamin D is a group of fat-soluble hormones. In humans, the most important forms of this vitamin are vitamin D3 (cholecalciferol) and vitamin D2 (ergocalciferol).

Vitamin D has essential responsibilities in the human body and helps to defend the immune system from chronic disease. The biological role which vitamin D plays in the human body is far more complex than our previous understanding. Interestingly, it has also recently been revealed to be influential in regulating GcMAF function.

Vitamin D is an Important Nutrient During Pregnancy

The ability of a baby to develop a strong defense system is influenced by environmental and genetic factors before birth. Vitamin D is critical during pregnancy in promoting a baby’s health and development.

The development of the central nervous system is largely influenced by vitamin D. For instance, the following neurobiological processes require vitamin D:

Autism is a disorder significantly affected by immune dysfunction. According to Dr. Bradstreet, symptoms in children with autism and autism spectrum disorders were shown to improve following treatment with GcMAF to promote innate macrophage activity.

Vitamin D deficiency disrupts the proper development of the immune system, affecting the brain and the spinal cord and is therefore linked to the development of autism. In pregnant women, vitamin D3 has been shown to reduce the risk of infertility and miscarriages by reducing the autoimmune response from natural killer cells.

An individual’s health is greatly influenced by the endocannabinoid system and its interaction with the immune system. The endocannabinoid system helps regulate homeostatic processes and is found in organs, glands, and immune cells located everywhere in the body. Individuals with autism have been reported to have altered endocannabinoid pathways and disrupted macrophage defenses. This problem leads to altered immune functioning. 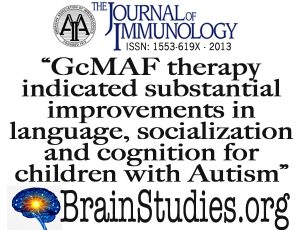 Those treating autistic children with it found that GcMAF diminishes autistic symptoms and improves the endocannabinoid system. Factors required to stimulate macrophage activity are improved in autistic individuals when treated with GcMAF. This treatment has led to improved receptor activity and gene expression.

Alpha-N-acetylgalactosaminidase or nagalase is an enzyme found in increased levels in people with autoimmune-related complications. Elevated levels of nagalase is associated with an increased risk for lupus, autism spectrum disorders, vital infections such as HIV and AIDS, and many types of cancer.

In fact, nagalase has been shown to accumulate in the blood of cancer patients. Its activity shows a strong correlation with the total mass of tumor tissue present in a patient (known as “tumor burden”), as well as how aggressive the cancer is and how quickly it spreads.

Interestingly, cancer cells can activate nagalase which in turn blocks GcMAF production. Researchers and physicians alike assess the severity of tumors in patients by measuring levels of the nagalase enzyme.

Activation of macrophages (the white blood cells that destroy non-healthy cells) is inhibited by nagalase. Nagalase reduces GcMAF through immunosuppression pathways; as a result, the availability of active macrophages is decreased. 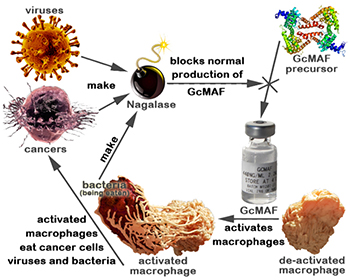 Nagalese produced by viruses, cancer cells, and bacteria can inhibit natural production of GcMAF, but not GcMAF injected into the body

Nagalase cannot stop an immune defense attack that is in the process of taking place. Fortunately, this enzyme also can’t minimize the effects of GcMAF already formed and stop cancer cells already detected from being destroyed.

Nagalase can inhibit the synthesis (production in the body) of GcMAF, but it cannot break down biologically identical GcMAF that is injected into the body or intravenously administered. This is why you need to stay away from nagalase-ridden vaccinations and get the natural GcMAF cancer cure instead!

The administration of GcMAF to individuals with cancer in clinical studies has exhibited remarkable success. Studies report improvements including:

Patients who were said to have “incurable” cancers and diseases were administered GcMAF as a weekly injection. Even at a late stage of the disease, anticancer immunotherapy was seen to be effective. Tumors reduced in size, nagalase activity decreased, and in some instances the cancer was completely eradicated after only six months of treatment.

Administering GcMAF to cancer patients with elevated levels of the nagalase enzyme was shown to lower enzymatic activity along with providing significant clinical benefits in a mixed group of patients with different types of cancers, generally considered incurable.

In most cases, GcMAF therapy was initiated at late stages of tumor progression. The nature of this study means that a cause-effect relationship between GcMAF administration and disease outcome cannot be established. However, some clear trends emerged. All 20 patients had a higher than normal nagalase activity. All patients except one showed a significant decrease in nagalase activity in response to weekly GcMAF injections.

Lower levels of nagalase activity was associated with improved clinical conditions. Importantly, no adverse side effects were reported. These results suggest that its worth exploring whether GcMAF is a potentially effective anticancer immunotherapy.

A wide variety of cancers were treated using the GcMAF treatment in clinical research as reported by Dr. Steve Hofman. These cancer types included:

Up to 50% of monocytes (a type of white blood cell) and macrophages are concentrated in the spleen. It is observed that blood flow increases to the spleen and notable factors are found to stimulate the immune system following GcMAF treatment.

An in vitro analysis of GcMAF treatment shows that cancer cells are completely eradicated after only seven days. Clinical research is required to further establish the body’s natural abilities to use GcMAF in order to prevent and cure cancer. However, there is anecdotal evidence that supports the ability of GcMAF immunotherapy treatment to be effective.

Now, here’s the best part about all this overwhelming evidence for the GcMAF cancer cure — you can get it right here from Living Technologies for a tiny fraction of what it will cost you to opt-in for costly and potentially lethal chemotherapy. Our Super Immune Activator has been helping people beat the deleterious effects of nagalase from vaccines and help them halt the metastatic cancer process by inducing apoptosis (healthy cell death and replication) and homeostasis.

Disclaimer: We are not medical professionals and are not selling products evaluated by the FDA, nor which are designed to diagnose, treat, or cure any disease. We are not “practicing medicine” nor are we giving official medical advice. We’ll leave that to the whitecoats and their poor track record of curing anything but their financial coffers. We leave the “curing” to Mother Nature and our friends in the animal kingdom. They know best what to do, and we are merely suggesting you follow that way instead of the way of Death, Inc. You already get that, though, which is why you are here!

So, here’s to your eternal optimum health and longevity. Buy our “GcMAF cancer cure” Super Immune Activator kit today for under $200 and save a fortune and very likely your life as well, if you are committed to following the SIA kit instructions and making a major lifestyle change (in most cases). but, it’s the kind of change you can keep.