Orgonite and Its Role in Electromagnetic Shielding

Posted by
in Uncategorized

In case you weren’t aware, we live in a world now that is under siege from every side by electromagnetic frequency radiation (EMF/EMR). The ramping-up of the 5G network along with the already long-established smart meter rollout, combined with a world full of cell phone towers and mobile devices at every turn, we need remedies, such as orgonite and its important role in electromagnetic shielding (aka RF shielding or EMF shielding). 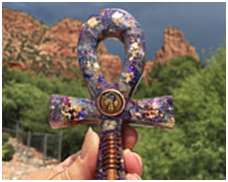 Orgonite and its Electromagnetic Shielding Benefits

The word Orgonite comes from “orgone”, the name given by Wilhelm Reich (1897–1957) to vital energy found everywhere in nature. It is life energy, also called Ch’i, Prana, and Aether. This vital energy exists, in a natural way, under many different forms. It can be neutral (OR=orgone), positive (POR=positive orgone energy) or negative (DOR = deadly orgone energy). When positive, it enables living organisms to exist in a healthy state. Reich did a lot of research on the properties and behaviors of this energy. He built an orgone accumulator
out of alternate layers of metal and organic material. He also observed that OR was able to neutralize nuclear radiation.

The hazards of electromagnetic frequencies only continue to increase. There is much concern about the potentially harmful effects of EMR (electromagnetic frequency radiation), which is on the rise. Although many health agencies still dismiss the risks of EMF/EMR as negligible, there is a lot of extant research that proves differently.

Case in point: In 1976, a study showed that the offspring of mice that were exposed to low-frequency EMR (electromagnetic radiation) from power lines were born stunted. Several researchers have shown connections between over-exposure to EMR and cancer. For example, in 1982, it was noted by a researcher that there were more leukemia-related deaths in men who worked close to electrical and magnetic fields.

Researchers in India found 593 studies which showed the negative effect of mobile phone towers on animals and plants. The researchers commented that the “review of existing literature shows that the EMF is interfering with biological systems in more ways than one and there had already been some warning bells sounded in the case on bees and birds, which probably heralds the seriousness of this issue and indicates the vulnerability of other species as well”

Also, anecdotal evidence shows that sensitive people can suffer from fatigue, headaches, insomnia, weakened immune system, depression, and many other symptoms when they are exposed to EMF. There is now a bona-fide illness known as EHS, or Electromagnetic Hypersensitivity.

Electromagnetic Hypersensitivity is the medical term for a set of health symptoms whose cause is electrically based. It is also called Electrical Sensitivity (ES), EMF injured, Microwave or Radiation Sickness, and other names. Vested industry interests are trying to control the
public’s perception of EHS on Wikipedia by calling EHS pseudoscience, which is false, and is also harmful to people and the doctors trying to help them.

We are electromagnetic beings, and we are affected by electricity in our environment (even the “dirty electricity” running through wires in our walls). The increasing saturation of wireless radiation (cell towers, cell and cordless phones, wi-fi and smart meters) pollutes our air and living environments. In order to maintain health and wellness prudent avoidance of EMF’s is advised. (You can remediate from a wireless environment by switching to ethernet cords only, and powering off any wireless devices after using them).

How Orgonite Protects against EMF

Thankfully, orgonite is an efficient way to diminish the effects of EMF. In fact, this is one of the most well-known and popular uses of orgonite.

Ways to use orgonitef electromagnetic shielding include:

You can also “gift” mobile phone towers in your vicinity. Gifting is a huge part of orgonite culture, and it’s a fantastic way to make a difference to the world around you.Sleep with a pendant beneath your pillow to protect from electromagnetic bombardment.

Orgonite does its work on the etheric level rather than the electromagnetic level. Rather than reducing radiation, it is proposed that orgonite works because chaotic, imbalanced orgone energy is a by-product of EMF/EMR. Orgonite does not eliminate EMF per se, it sets up a scalar field of protection around your body, the size of which depends on the pendant you wear.

People who are sensitive to electromagnetic radiation have been helped greatly by orgonite. For example, disturbed sleep and insomnia are one of the most common symptoms of low-level sensitivity to EMF radiation. One of the most widely reported beneficial effects of orgonite is that it helps people sleep better, especially those who have problems with insomnia (although if you’ve been introduced to orgonite for the first time, the influx of positive orgone may energize you and make it more difficult to sleep to begin with!

In case you are “orgonite sensitive”, let your body adapt to it slowly – don’t wear pendants while sleeping, or keep orgonite in the bedroom until you’ve become used to the energy. (Eventually, you will sleep more soundly). Personally, I was extremely EMF sensitized and took to orgonite like a duck to water and never looked back, so I would say the perception regarding so-called org. sensitivity is probably backwards in some circles.

Sure, you can make your own orgonite, but it takes a lot of time and gathering constituent parts from several different sources. You’ll actually end up saving money with our line of orgonite pendants, ranging from around $32-$72. You can save a lot of time spent buying crystals, resin, metal shavings, a device for molding the epoxy resin, etc. and just buy some of our beautiful offerings!

Orgonite pyramids are a great and popular way among those in the know to stay protected from EMF radiation. They can very powerfully provide protection from EMF dangers and EMF exposure symptoms. Living Technologies is proud to feature Sedona Vortex Orgonite pendants on our site. These are beautiful, stylish, and powerful electromagnetic shielding against EMF radiation.

These are affordable, great ways to enjoy electromagnetic shielding from ubiquitous EMF radiation. Your life and health are worth making the purchase, each one of which is well under $100. What are you spending $100 on that you could forego in favor of your health?